Prospect Day Details
We look forward to having you!

This full-day event is a great way to learn more about Denison University and the lacrosse program and gives you a unique opportunity to interact with our current players. The event is open to all Sophomores (2024s) and Juniors (2023s). As a side note- we realize that a 9am-3pm commitment is a long day. If you are only able to attend a part of the day, please let us know and we will work with you! We would love to have you join us and look forward to hearing from you. Please don't hesitate to reach out with any questions. 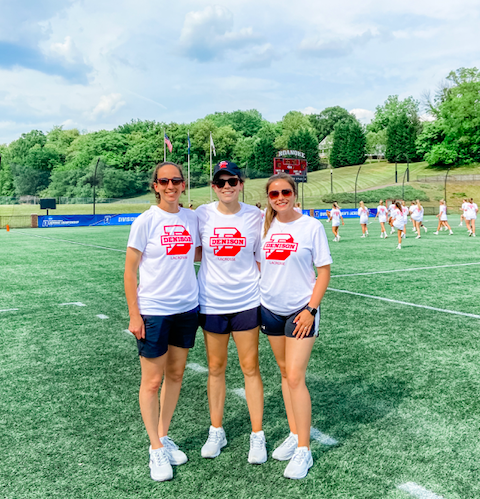 Head Coach Amanda Daniels returns for her ninth season at Denison in 2022. Few coaches have had a better start to their careers than Daniels. In eight years as the Big Red head coach, she has guided Denison to seven NCAA Tournament appearances, a Final Four appearance in 2021, five North Coast Athletic Conference championships, and seven NCAC Tournament titles since 2014.  Denison will take a 42-game regular-season conference winning streak into the 2022 season. That streak dates back to the 2015 season. Daniels has compiled an impressive record of 99-35 (.739) while going 49-4 (.925) in NCAC contests.  She was named the NCAC Coach of the Year in 2016 and is a two-time IWLCA West Region Coach of the Year in 2016, 2019, and 2021.

In 2021, the Big Red had a historic run into the NCAA Tournament that saw them fall to eventual National Champion Salisbury in the Final Four. The Big Red finished the season 12-2 and captured their seven straight NCAC tournament title. Daniels coached three All-Americans in Casey McTague, Charlotte Godfrey, and Liza Farnham. Farnham was named NCAC Offensive Player of the Year and McTague was named NCAC Midfielder of the Year.

Maddie Coleman enters her ninth season as the assistant women’s lacrosse coach at Denison in 2021 and her third season as Associate Head Coach. Coleman was named the Intercollegiate Women’s Lacrosse Association Assistant Coach of the Year for Division III Women’s Lacrosse in 2018. Coleman is involved in all aspects of the program on and off the field.  Her primary concentration on the field is defense and goalie coordination.

SCHEDULE OF THE DAY

The Denison Women’s Lacrosse Team means everything to me. From walking on the team freshman year and not knowing anyone to now going into my senior year, this program and team have become family. My teammates and the game of lacrosse have taught me so many life skills. A few that stand out are accountability, responsibility, and leadership. This program has given me the support and encouragement of living in New Zealand for five months by myself. It has pushed me to pursue a degree that fulfills me in Psychology and Education and it has simply pushed me to be a better person. I have learned skills that I wouldn’t have been able to learn anywhere else. Skills that will resonate with me forever and I can’t thank this program enough for that.

The DUWL program has such a meaningful impact on my overall Denison experience. My coaches have been incredible role models and my teammates have pushed me to be a better player, person, and student. I truly can’t imagine my college experience without DUWL in it.

DUWL has not only given me a second family on the hill but has also provided me with a comfortable environment where I can not only grow immensely as an athlete but also inspires me to become my best self every single day. The people on this team are the most caring, thoughtful, and most of all fun that I have ever met before and truly made the transition to college so much easier. That’s what truly makes this team so special and Denison so different from any other school. We all really care about each other and root for each other on and off the field and at the end of the day, that’s what really counts and makes our team have such good chemistry. I honestly would not want to play for any other team and am grateful every single day for this goofy group of girls and this school.

From the first day on campus as a freshman DUWL gave me 32 people immediately looking out for me and supporting me. It is so special to be a part of a team at Denison because not only do we support each other, but the entire athletic community at Denison is there supporting you in the classroom and on the field. We push each other to be better athletes, students, and people.

Denison women’s lacrosse to me means family. Our team has created a sense of sisterhood that I don’t believe can be found anywhere else. The freedom to be who we are on and off the field builds the team chemistry that keeps us running. Denison women’s lacrosse stretches much farther than just the field. We have lots of fun but know how to do get the job done. This team has made my Denison experience very special, and I couldn’t imagine going through it without my teammates and sisters by my side, DUWL!

Directions: Denison's 900-acre hillside campus is in Granville, Ohio, just 27 miles east of Columbus, the state capital. Port Columbus International Airport is about 22 miles from campus and is served by most major airlines.

For any questions, please contact Amanda Daniels or Maddie Coleman